This is the story about Hidalgo, Oralee Hidalgo. Born in Germany, moved to Norway when he was old enough.

For a long time I had close contact with Stefanie, Hidalgo's breeder.
I was looking for a new girl and a wanted a little girl after Charly. Charly had to grow up, and some time in the middle, Carolynn came in to my life.
We became very close in  a very short time. Some friendships just bloom from first day and are ment to be special.
Our little dream girl became a wish for a little Charly son instead. And a black patterned boy, not a chocolate, and a high wish from a certain combination.
The long waiting began and the babies was born.
And there Hidalgo was, a little blackspotted wonderful baby.
Could he be ours? Yes, he could. We were so happy. 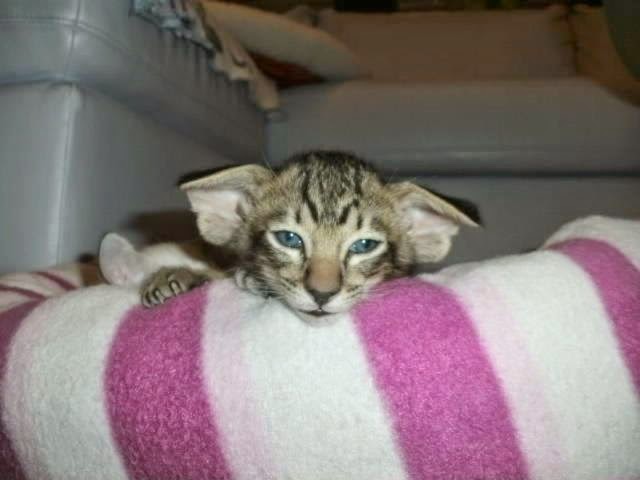 Now we were waiting for Hidalgo to get old enough to come to us.
A lot of pictures and updates.
The time came to go pick him up.
Carolynn and her daughter drove down to Germany and had a great time there with Stefanie and her husband.
And in the car back home - they had this precious,wonderful tempered little kitten.
He became Carolynn's daughters cat and was ment to stay forever. 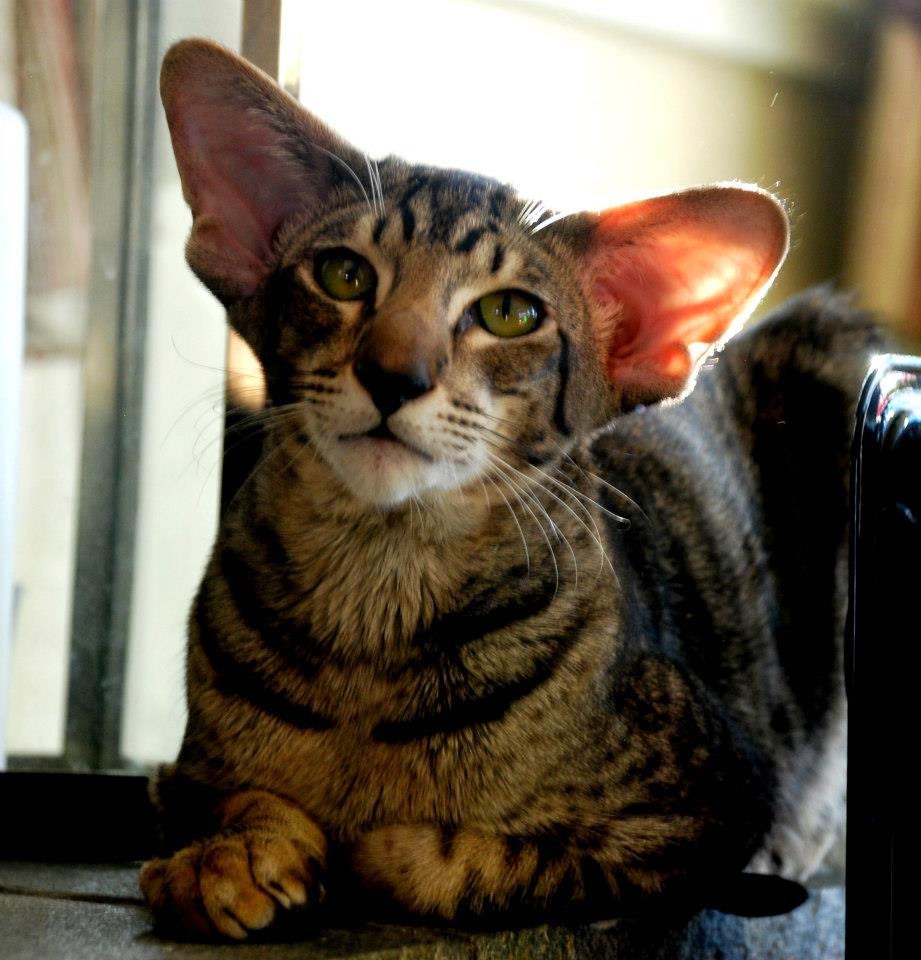 Hidalgo grow bigger and bigger, and his childhood was suddenly over.
He started a new hobby, a hobby many fertile males can do - he started to spray. After a while he became very good at it - a real expert.
But the perfect soloution for that was the human baby diapers, and Hidalgo was still a fully familymember who loved his life as a fully familymember. 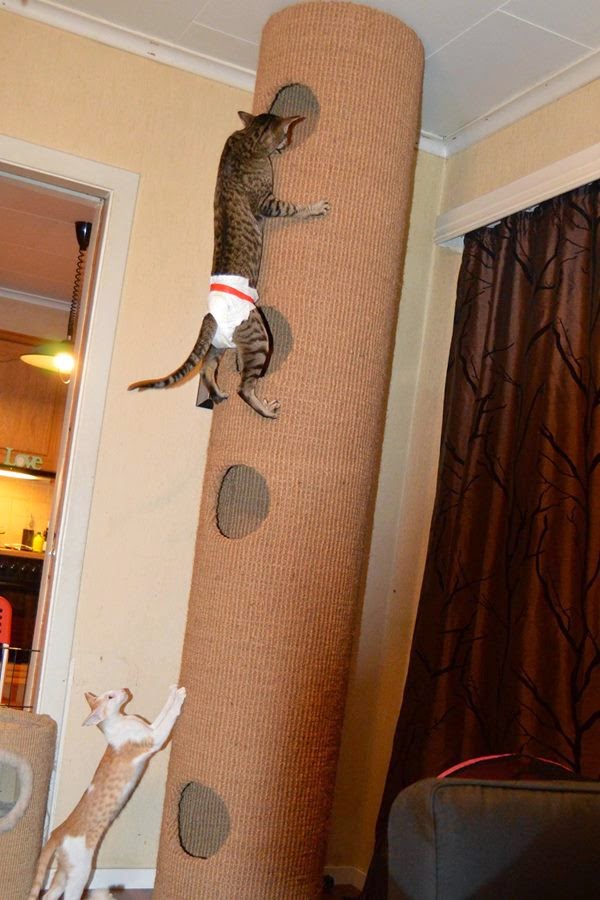 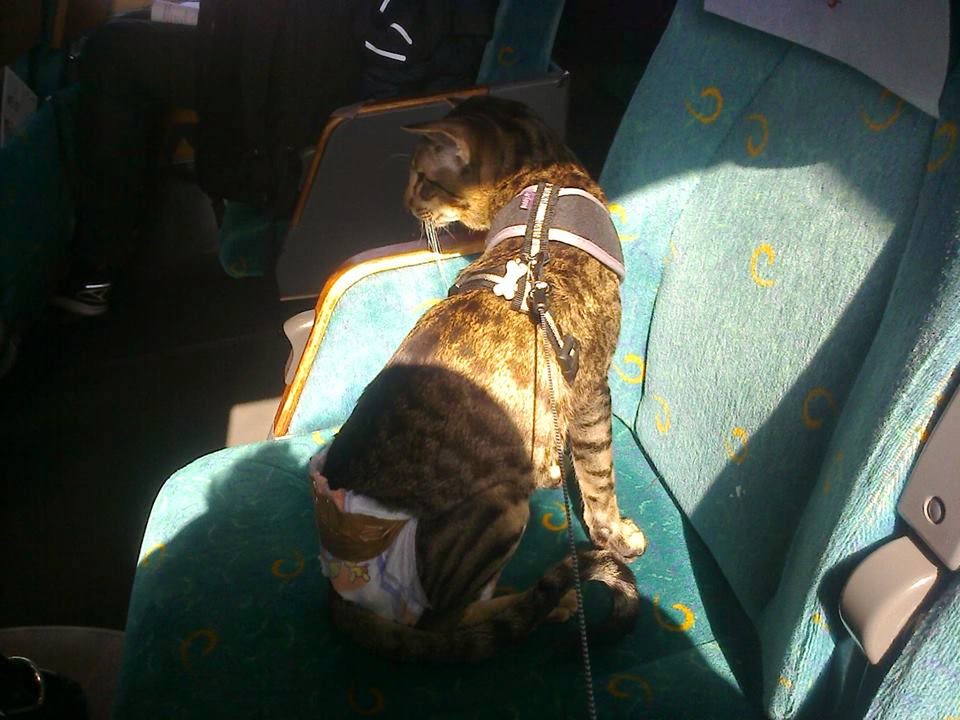 His home was in Kristiansand, but he was often at visit at our home too.
His amazing temper aloud us to have wonderful walks together, he charmed everyone he met. 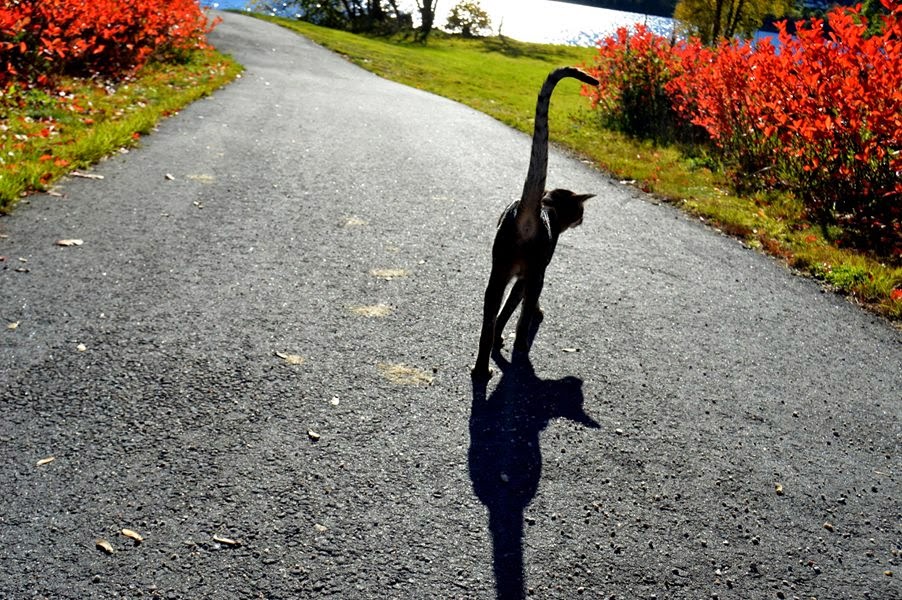 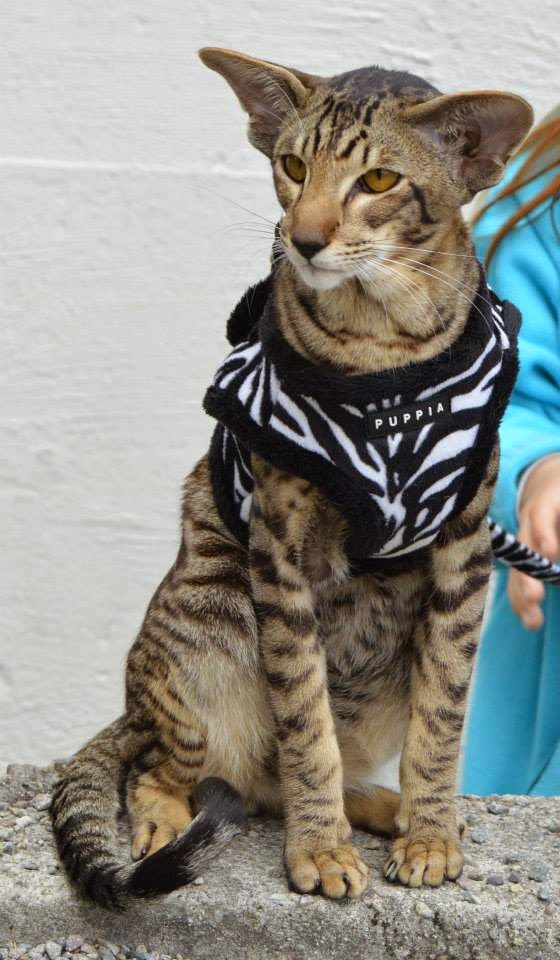 The time went, and it was time to start into the adult world of joys for him, and he had his first litter. 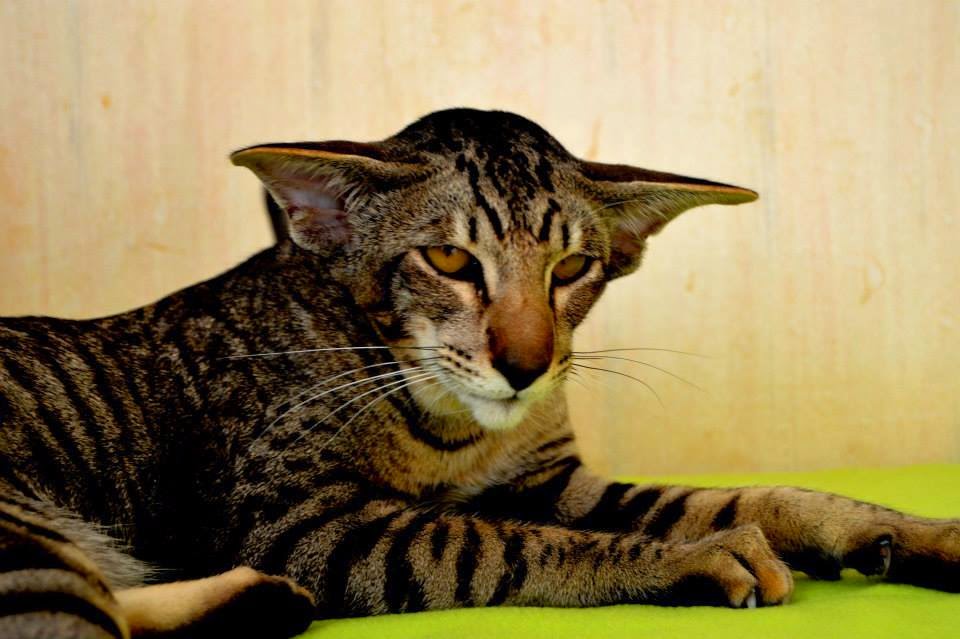 Few month later he got another one. He was so happy and loved them from the early beginning.
Since me and Carolynn let all our cats spent time together, either it was the big cats or the kittens , from time to time - Hidalgo had the chance to also be together with his own kittens and other kittens born in our cattery. A kitten is a kitten - by bloodline or others - all little babies needs lots of kisses and lots of love - that was Hidalgo's mission. 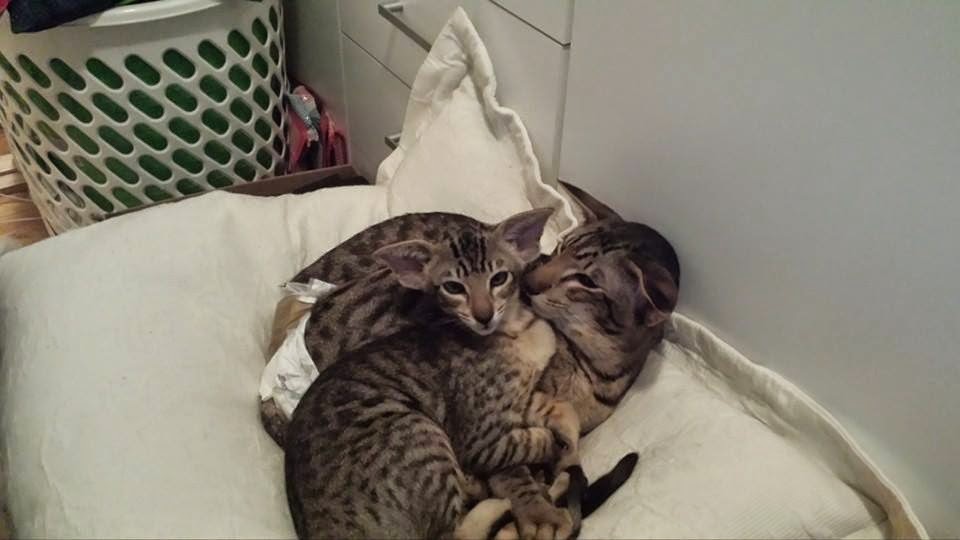 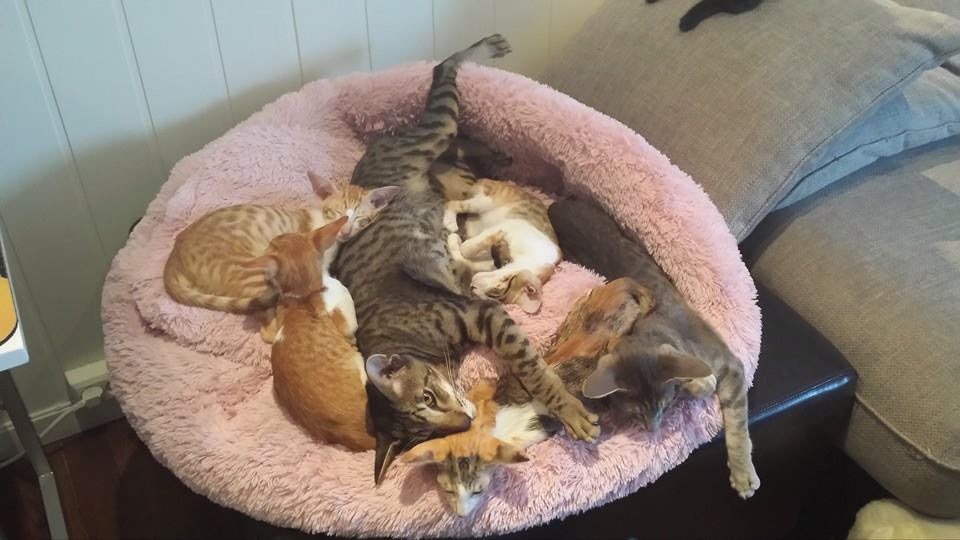 OBS OBS - please read this and keep it on your mind!!
Hidalgo is a wonderful cat, a very special cat. But his spraying got worse and worse.
We decidet to put him on a Suprelorin Chip - so he could have a longer break. We had still lots of future plans for him - but it could be nice with a "dry season" with him too.
Earlier experiences with the Suprelorin Chip has always been great.
They stop spraying and get calm. The chip last for  1-2 years and then they are ready again to be used in breeding.
Since Hidalgo is our special cat, the chip did of course give us a special experience. An experience we would love to be without.
Hidalgo got his chip and all were ok for 2 weeks. Sudden it just explodet in his leg :-(
We rushed with him to the Vet, and Hidalgo's body had an rejection of the chip - it did not work.
But at the same time, the whole material in the chip was loadet in to his body at the same time and his liver and kidney value got dangerous high.
There was nothing else to do, than keep an extra close eye on him, and Carolynn had to give him all the TLC she could. If he was a strong cat, he would make it, if not his liver and kidneys would be damage for life, or he could even die.
Hidalgo made it trough and with a miracle his liver and kidneys did make it as well. We think it was because of his body did not want to have the chip inside it.
Some very few cats, both females and males are in a sort of way allergic to birthcontroll pills and suprelorin chips. It can be easily checked with a bloodsample before they get any of it.
But we  did not knew anything about this, not before our own tragic experience.
Because it is tragic , such a wonderful male with so many super qualitees, a amazing temper, and no more kittens after him.
So please breeder-fellows - please spread those words about Hidalgo's experience with the Suprelorin chip so maybe you don't need to have the same experiences.
The chip is not a bad thing for many cats, but for some cats it can be fatale!! But it doesn't need to be, if you run a special bloodtest first.
If you want to know more about all this - just send a private message to his owner, Carolynn Knott on Facebook. 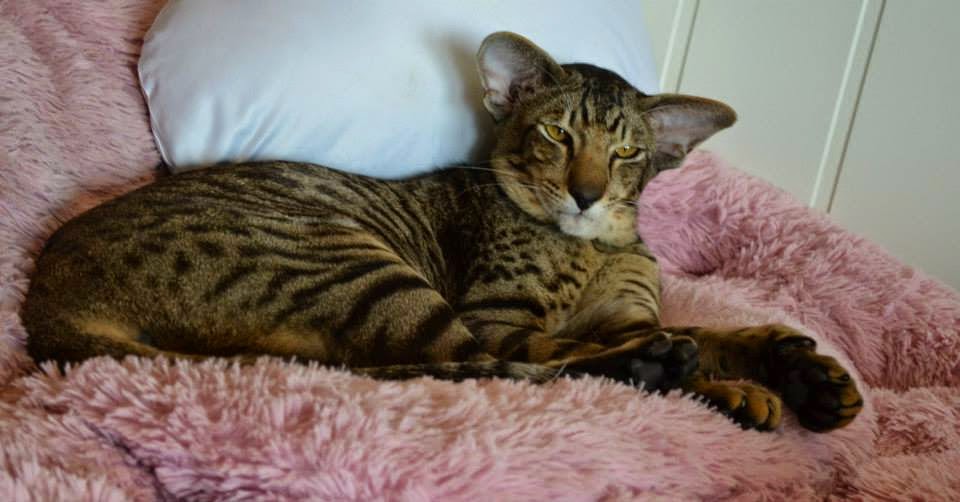 Hidalgo was then neutred. Sad, yes , but he is a wonderful neuter too.
And we got 3 wonderful offspring to use after him, and 2 other of his offspring is in other catteries as well.
Now his time as a happy neuter could start. Carolynn's daughter could have back her non-spraying couddle monster.
But no!! Hidalgo is the kind of cat who did not stop spraying after his neutering.
In periods it was really awful.
He did pee everywere in the house, and on material things. It is not fun to have a broken TV or other broken eletric stuff. It is not fun to step in pee, sleep in pee etc etc.
We tought maybe it would be better if we did seperate Tiger and Hidalgo for a while, because both of them wanted to stay on the top of their system , even they are best friends and has always been.
Tiger came home to me, and Hidalgo stoped for a short while. We got all so optimistic. But then it turned bad again, even worse.
He was followed outside so he could spray on the neighbours bushes, but no, still spraying like a god inside.
We placed his son, Jimmy together with Tiger, since he is getting fertile, worried he would learn from his father and start to spray too.

Now we were desperate, what to do.
A very last option when you have a cat like that, if you can not manage to live with it, is to put them down. I do understand those who does that, when you have tried really everything. But noone of us wanted to do that.
We were talking about rehoming him, but what if he did not stop? Or would it be possible to rehome a spraying neutred cat?
Yes, some cats who moves to a new enviroment and get a fresh start, some stops.
I have some very nice earlier kitten buyers who would be perfect for Hidalgo, but during their private circumstances, it was not the right place for Hidalgo.
We had some other backup plans as well, but it did not work out.
So Carolynn had a (neutred) diaper boy again.

But sometimes just thing happens, strange things.
In late Summer this year, our now dear and close friend, Hanna, from Finland came to us , to pick up one of our kittens. (N) Attack's ICandy - a son of Hidalgo.
What happend? She fell totally in love with Hidalgo as well, and I think Hidalgo fell deeply in love with her.
Carolynn told about the sad dilemma with Hidalgo.

To make the story short, Hanna went back home to Finland to have some seriously thinking.
And she did not need to think long. She wanted to give Hidalgo a new home.
We had to ask her again and again, because we did not really understand what she was saying.

And now ,almost 4 month later, Hanna and Hidalgo is together in Finland.
We spent this weekend together in Denmark and had a lot of fun. Hidalgo was together with us, and he really loved to be a lonly child in the hotell room. And he did not spray once!!

So thank you so so much, dear Hanna. 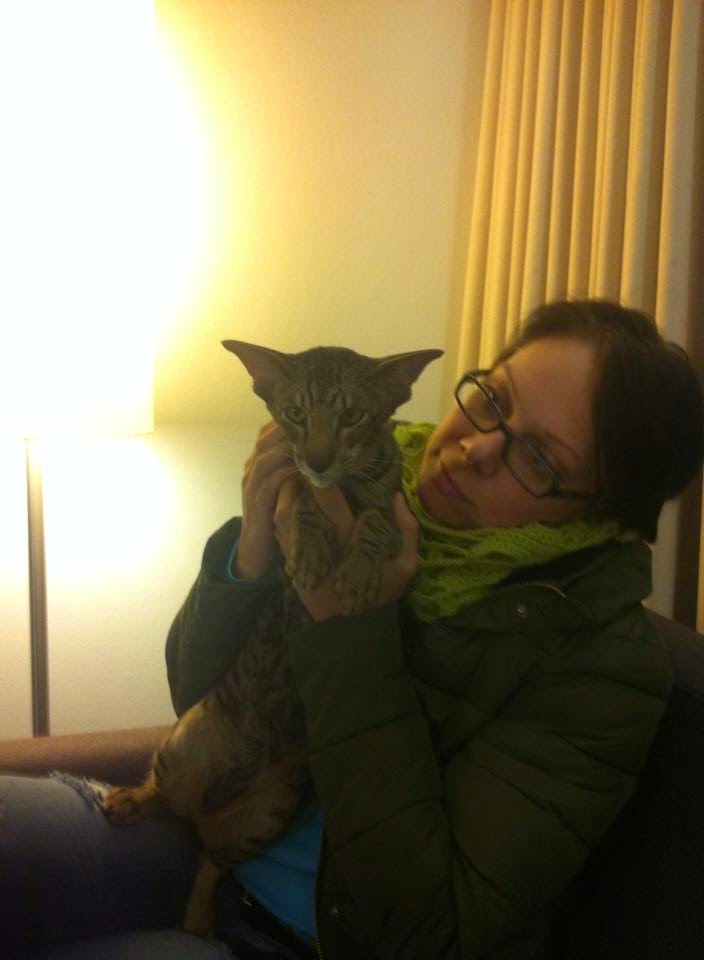 Hidalgo is now owned by Hanna Kekkonen ( and Carolynn), and will start his new happy life.
He had his first time ever , at a cat show in August - 14 - 2 years old and he really enjoyed it. Because he is so in love with all people. Hanna who loves to go to cat shows might have a show plan for him in the future? And for Carolynn , I am sure it is not the last time you will see Hidalgo. It will be plenty of times in the future you can kiss his big nose again :-) 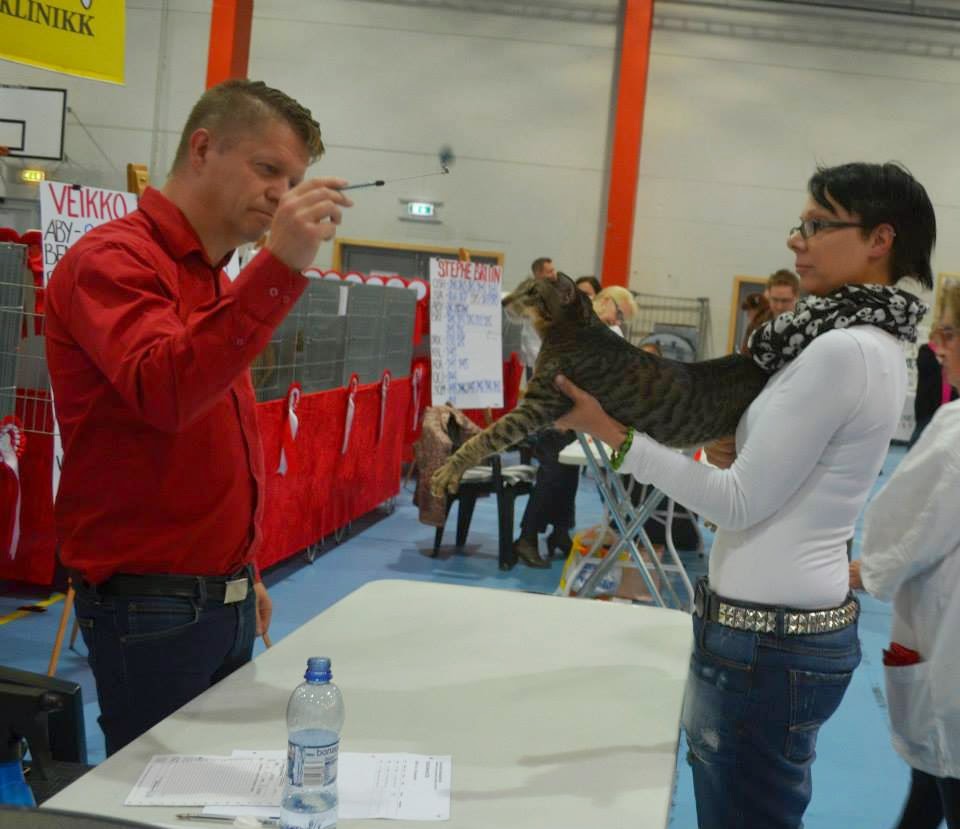 And thank you also, Stefanie - breeder of Hidalgo for beeing so understanding about all this.
Lagt inn av (N)Attacks Cattery kl. 11:04:00 PM