Our sweetheart,Fayette is still hanging around us :-)
I love her more and more each  day goes by,both on her inside and outside.

Because of very sad circumstances,Fayette will stay with us.
I will be forever greatful to the breeder who suppose to have her in short time. It was hers suggestion.
We will anyway cooperate in future.

Here are a couple of pictures taken today : 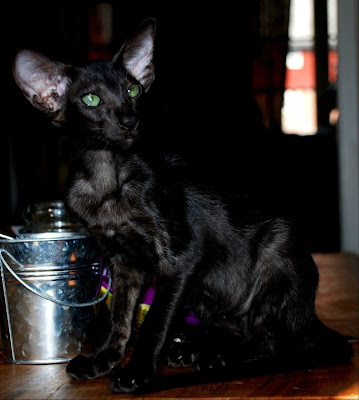 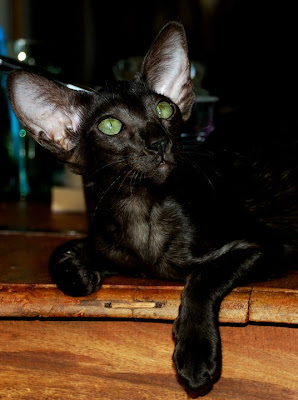 A little update of many things

At the moment it is very silent in our Cattery.
One of Major and Maidens babies has left to her fosterhome,where she will be living until her owner is ready to take her home.
The best home a future happy neuter could have.
Siouxsie Sioux will be living in Hungary with a very good friend of mine. She is study on the Vetrinarian School down there. Her sister have 2 cats from me in the past,and her mother has also 1 cat from me.
Siouxsie Sioux will be living with 2 very sweet orientals.
It became so silent when she left. Because she is a clone of her sweet father,and talks and purrs all the time. 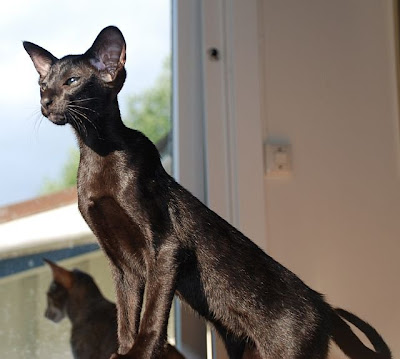 Her sister Fayette will be staying here a little longer,but sometimes in the end of the Summer she will also move abroad.
She love beeing a single child,and get alot of attention from all her babysitters:-)
Both the girls has developed a very nice elegance and got wonderful green eyes. I am very pleased with them,and both got super temper.
Fayette has become more and more alike her halfsister Penny in her attitued,even the same voice. 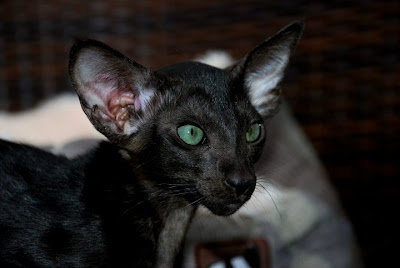 "Sushi", pedigree name (N)Attack's Devils Daughter broke her foot end of Easter. It was a nasty break but she has been such a brave girl for sevreal of weeks. But she was lucky after all. Her break up could be fixed with a fixarator, so she did not need to be put in a cage with totally no movements for 6 weeks. She have been able to walk on her food all the time.
This would not been possible without one suuuuuuuper vetrinarian at Sørlandets Dyreklinkk , Kristin and her team. We are forever  greatful for all the help.
Sushi had the fixarator on her foot for 10 weeks. This breed is very caring for eachother,but her closest friend of them all is her halfsister Pearl.
This Monday 4th of July she was fully recovered!! 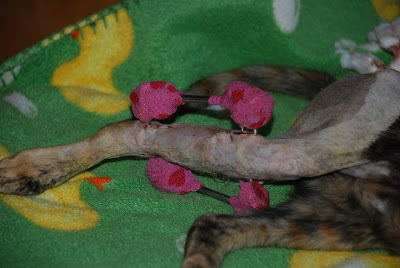 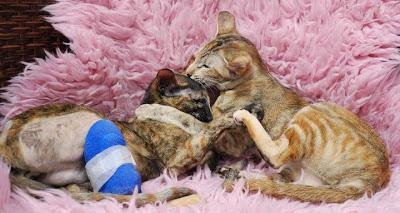 At the breeding front we will see what happens. Our SYS boy, Leo has been mated 2 of the girls here. We don't know if he is ready to make babies yes, he is only 1 year old.
In next week he will be put on the Suplerion Chip,so he will be temporary neutred. We have made that dessision because he stress alot and have no time to coudle.
If we will not have babies after him this year,we will have later. 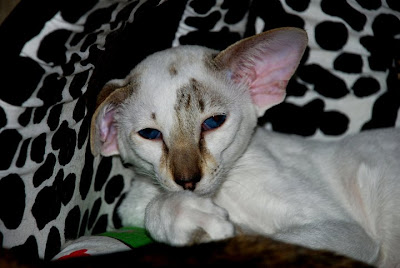 Our gentle and sweet boys, Omar and Disco will arrive with us in end of Summer,so we will have some exiting combinations this Winther if the cats agrees with my plans.

We are also waiting for 3 more PRA tests,and hopfully we know in end of next week. Crossing fingers :-) The result will be published later on my page and  Pawpeds .

And a new wonderful creature will hopfully move in to us later this year as well.
All I can say, it is a girl. When and from who, will be kept as a secret until my dreams comes true :-)

This was a little update for this time.
Have a wonderful Summer everyone.
Lagt inn av (N)Attacks Cattery kl. 4:18:00 PM