About 4 weeks ago Cover was expecting her babies.
We have tried one time in the past. but then she just had a stillborn baby.
Since Ainur came to us anyway, hoping to get Sparkling in to heat , we decidet to mate Cover again, since she started to call 1 w before her halfsister.
Cover started to grow, but then it was like she was shrinking a little. Her due day came closer and closer. One thing we were sure of, was that  some babies had been absorbed.
Her birth started, and she gave birth to a really huge baby girl. It was just the one in her belly.
Sadly it did not live for many hours.
Talking with our Vet after, she did suspect pre-eclampsia after telling her about the birth and the pregnantcy.

Me and Carolynn was talking about if we were going to give Cover another chance next year or not.

Sparkling was placed in the bedroom, keeping Cover company while she was recovering after the hard birth.
A little week later, Sparkling was giving birth to her babies, and Cover was a good suporter. 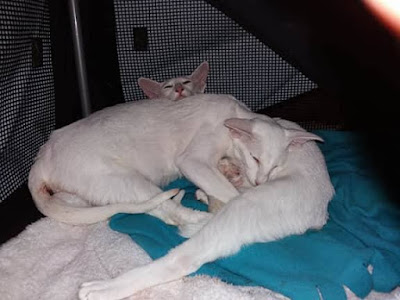 After a long night, the birth was over.
We did see that Cover really wanted to help out, but was a danger to the babies, because she was so clumsy, so after a while we decidet it was better for Sparkling to take care of her babies by herself.

Everything looked so perfect. The milk was flowing and the babies was so happy.
I had to go to work , but a couple of days later, all the kittens screamed and screamed and I noticed that the milk that had been there, was gone! Sparkling had lost her appetite too.

So I had to start to help out by giving them extra milk.
5 hungry babies!
Sadly we lost 2 babies during theese weeks, to pneunomia , but the 3 remaining girls battled on.

Sparkling got a B-vitamin shot, and her appetite went back on, and she has since then eate ALOT of IAMS wet food and raw meat.
The milk came back , to two nipples....
2 nipples and 3 kittens - I still had to help out. 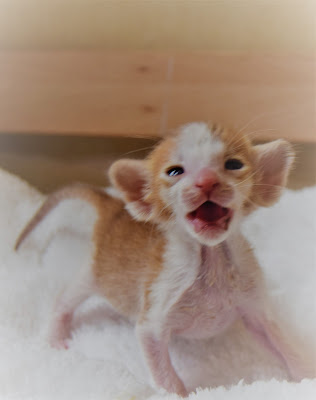 The babies are 19 days old today, while I am writing.
They moved down to the kitchen yesterday.


Let me introduce you to our strong baby girls. 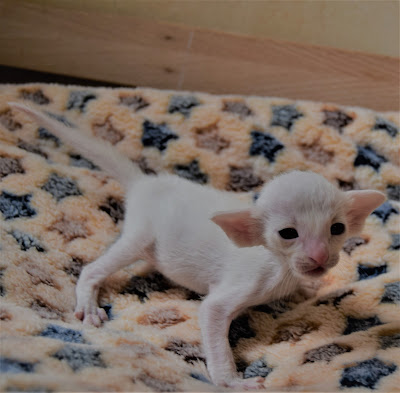 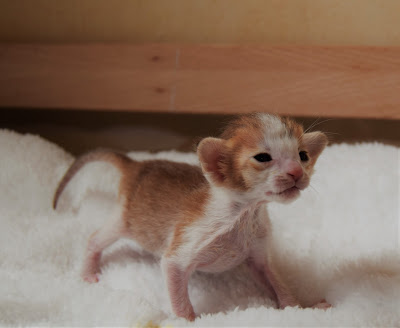 And the biggest that always got hold on the best nipple : 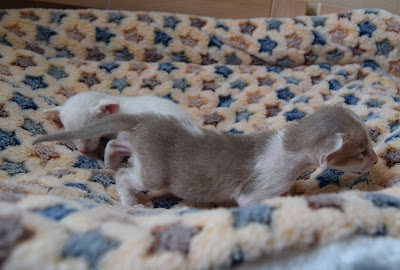 All I am 100% sure of is the gender of theese babies.
We have one cinnamon bicolour, I know she is spotted, but she might be a tortie as well.
The white baby, might be a white, but she can also be a siamese with white, high white , lilac/fawn tortie.
Little Fatty there, is most likly lilac spotted with white.
All of them have been purring everytime they are held since they were just a few days old.

Noone of theese babies are for sale at the moment.

Their Auntie Cover has moved out in a forever pet home, after we deicdet that she was not that kind of cat we want to give a third chance for a litter.
She will instead have a very spoiled life together with Zivas blue kitten from her first litter here in Norway. 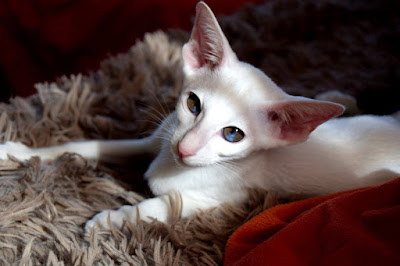 Hopefully in short time the babies will eat solid food, and my Zombie life will get back to normal.
Working,feeding, lack of sleep is not a pleacant combination.
Lagt inn av (N)Attacks Cattery kl. 3:48:00 PM